"America is the only country that went from barbarism to decadence without civilization in between" - Oscar Wilde Named after the famous Italian explorer Amerigo Vespucci, America has a dense history. It started from 40,000 years ago when the 1st Paleo-American hunters reached America walking over an ice bridge from Asia during the last Ice Age. Christopher Columbus was the 1stItalian expeditor to discover America. Jamestown was the 1st British colony in America. Gradually there were British invasions and colonization which were broken free in 4th July, 1776. The Day of American Independence. George Washington was the 1st president of Independent America. America played its major role in the 1st World War where it helped its allies England and France defeating Germany and the Central forces. In the 2nd World War, America joined her allies UK, France and Russia against the Axis powers viz. Japan, Germany and Italy. The dropping of two nuclear bombs in Hiroshima and Nagasaki in Japan resulted in the termination of the 2nd World War with Japan's surrender. In 1969, US became the 1st country in the world to land a man, Neil Armstrong, on moon with the Apollo XI mission. US also had its part in the cold war with USSR for supremacy. In more recent endeavors, America repelled the Iraqi invasions of Kuwait in the Gulf War and have terminated Osama bin Laden, leader of the al Qaeda, responsible for the loss of 3000 American lives in the terrorist attack of 9/11 at the World Trade Center. America has its mark in history till contemporary times.

America is bordered by Canada in the North, Mexico in the South, the Pacific Ocean in the West and the Atlantic Ocean in the East. The terrain comprises vast central plain, mountains in west, hills and low mountains in east; rugged mountains and broad river valleys in the north in Alaska; rugged, volcanic topography in Hawaii. It ranks 3rd in terms of area with a total area of 9,629,091 sq. km of which 97.77% is land and the remaining 2.23% is water. It has a coastline of 19,990km.
The highest point of the country is Mount McKinley (6,168m above sea level) and
The lowest point of the country is Bad water Basin (86m below sea level)
It has its longest river, River Missouri (3,767 km) and the Largest Lake, Lake Michigan (58,000 sq. km)

The US has a diverse climate.In the West it is mostly semi-arid to desert, In the Mountains, it is alpine,In the Northeast it is humid continental, In the Southeast it is humid subtropical, The Coast of California experiences Mediterranean climate,In the Pacific Northwest, it is cool temperate oceanic, In the Alaska it is mostly subarctic, whereas in the Hawaii the climate is completely tropical.

It's famous for its wide array of popular tourist destinations, ranging from the skyscrapers of Manhattan and Chicago, to the natural wonders of Yellowstone and Alaska, to the warm, sunny beaches of Florida, Hawaii and Southern California. USA has diversified cities with plenty of tourist attractions which cannot be narrowed down to list but few have specific attractions such as

The top five cities of United States are:
One must not miss the Shedds Aquarium, Adler's Planetarium, Art Institute of Chicago, 360 Chicago, Navy pier in Chicago. The Golden Gate Bridge, Fisherman's Wharf, Alcatraz, Chinatown are a "must-see" in San Francisco.

The Canyon Road, El Rancho de Las Golondrinas, Loretto Chapel and the Museum of International Folk Art are among the famous spots in Santa Fe, NM.
Charleston Water Taxi, South Carolina Aquarium, Cathedral of Saint John's The Baptist are places not to be missed in Charleston.

Famous Hotels in US

The famous hotels of USA are :

It is a "melting pot" of cultures from around the world and plays a dominant role in the world's cultural landscape. American cooking (US cooking) is usually considered to consist of the traditional dishes long popular in the USA. Most were introduced by the early European immigrants but modified to take advantage of the locally available ingredients and to conform to local tastes. Fried chicken, meatloaf, baked potato, corn, baked beans and apple pie would be considered traditional American dishes. Restaurants serving all sorts of delicacies from American style hamburgers, hot dogs and fried chicken to Italian pizza, Mexican tacos, Greek Gyros and Chinese egg rolls are available. Healthy Food is very popular in the USA. Salad bars are very common and many restaurants offer low calorie or low fat items on their menus.


Some of the busiest airports of USA at a glance are:
Posted By : All Places Map Last Updated: August 15, 2017
Flag of USA 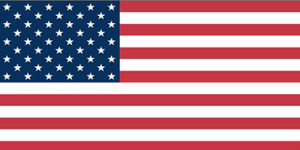